Take Back Alabama 2018 a Huge Success 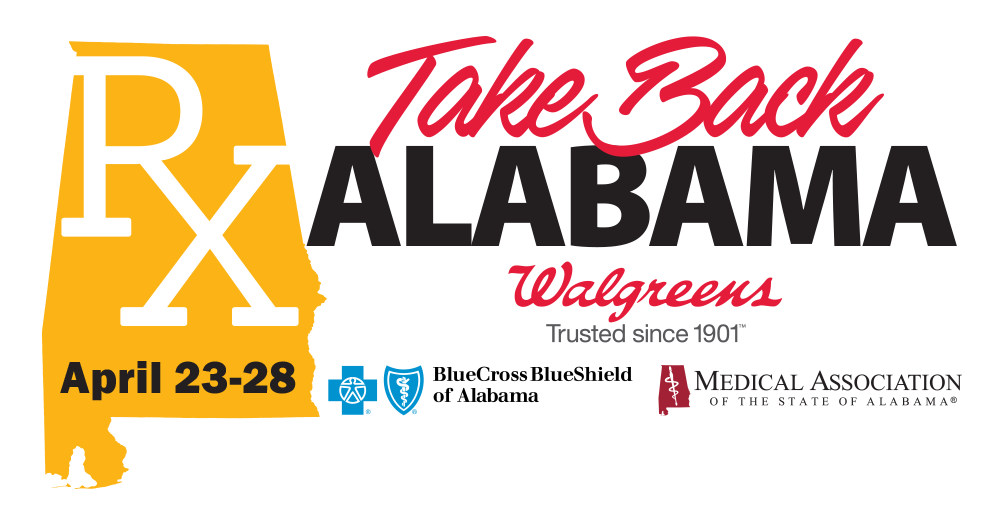 The kiosks allow individuals to safely and conveniently dispose of unwanted, unused or expired medications, including controlled substances and over-the-counter medications at no cost. They are available during regular pharmacy hours.

The week ended with Take Back Alabama’s parent program, Smart & Safe Alabama, exhibiting at the Annual Opioid Crisis in Alabama: From Silos to Solutions to further spread the word about the new medication disposal kiosks as well as raising awareness for prescription drug safety.

View the coverage, courtesy of WIAT:

APRIL 20, 2018 ─ According to the Alabama Department of Public Health, 749 Alabama residents died in 2016 due to drug overdose, which includes prescription drug overdose. This number is up from 726 in 2015…and this is why the Medical Association of the State of Alabama created Take Back Alabama Week. In an unprecedented partnership, the Medical Association reached out to Walgreens, Blue Cross Blue Shield of Alabama and Pfizer to form a strategic alliance for education about and safe disposal of prescription medications.

Take Back Alabama Week is April 23-28, and kicks off Monday, April 23, with a media event at Walgreens located at 4700 Highway 280 in Birmingham. The event is the perfect opportunity to spread the word about the availability of safe medication disposal kiosks in 13 Walgreens locations across Alabama. Attorney General Steve Marshall and Birmingham physician Gregory Ayers will join representatives from Blue Cross and Blue Shield of Alabama and Pfizer to kick off the campaign.

“While Alabama has beaten the national average from 2013 to 2017 in the percentage of reduction in opioid prescriptions, we still lead the nation in the total number of opioid prescriptions on a per capita basis,” said Medical Association Executive Director Mark Jackson. “That’s why joining forces with Blue Cross Blue Shield of Alabama, Walgreens and Pfizer is so important. We are waging an information campaign to educate Alabamians not only of the dangers of the misuse of opioids and other prescription medications but also that there are alternatives to opioids. It begins with an open and honest conversation with your physician to find the best treatment plan for each patient.”

Visit the following Walgreens locations to safely dispose of your unused medications:

Walgreens at these locations have drop boxes in which residents may safely deposit unused prescriptions and over-the-counter medications…no questions asked. These boxes are locked, and there is no danger of your medications getting into the hands of someone who could accidentally overdose or misuse them.